“You can’t do your job and be afraid” – Dottie Herman

“You can’t do your job and be afraid”

“You can’t do your job and be afraid” 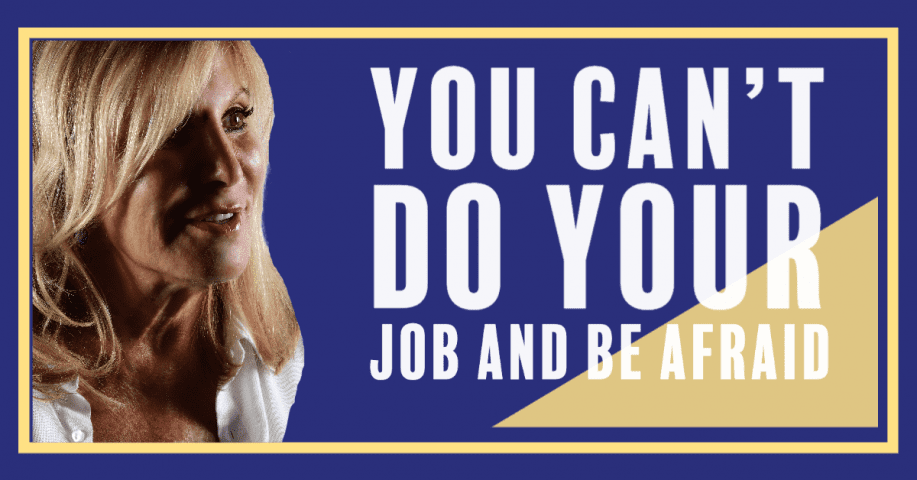 I recently heard a story about Meryl Streep before she landed her first role in a film. Meryl was 26 when she went on an audition for Federico De Laurentis, the son of legendary film producer Dino De Laurentis for his remake of King Kong. He had seen Meryl in a play and thought she would be a great lead to play the role Fay Wray originated. While Federico saw something special in Meryl Streep, his father did not. At the audition, Dino De Laurentis spoke in Italian, saying “why do you bring me this ugly thing?” believing Streep wouldn’t know what he was saying. But she did. And before walking out of the audition, she shot back at the famed director-with a quippy “I am sorry I am not beautiful enough to play the lead in…King….Kong!” And she said it in Italian!

As it turned out, this was a pivotal moment for Streep. She could have allowed the opinion of one person to derail her entire career, smashing her dreams of becoming an actress or she could pull herself up by her bootstraps and believe in herself enough to keep on moving toward her goals. Afterall, this was just one opinion in a sea of thousands. If Streep had given it any significance, if she had believed that his words were more powerful than her talent, she might have given up right there and then. And, of course, she wouldn’t have ultimately been nominated for an Oscar 21 time and winning three.

How many times have we allowed ourselves to give in to someone else’s opinion of us, giving it more significance and meaning than we should have? When I first started out in real estate, I was told it was a boy’s club and that I’d never make it as a woman. When I branched out to the Hampton’s, I was told I’d never be able to break through in that market. There have been so many times in my life when I could have just thrown my hands up and said, “Oh well.” “It will be too hard.” “They’re right.” But I didn’t.

I had to learn to doubt my doubt as I had to learn to doubt the doubters. It isn’t easy to do, but it’s crucial to achieving success. Tom Ferry often talks about the dangers of being addicted to the opinions of others. Believing that what other’s think of us somehow matters more than what we think of ourselves. Why give anyone else that power? Sure, I am a people pleaser, and I surely don’t want to upset the apple cart along the way, but I’ve learned that sometimes you will. And that’s ok. There will be times you will pursue what you set out to do and others will do whatever it takes to hold you back-even if what they think is not true That’s when you have to dig deep and find the strength to power on. For those critics, Mark Twain quoted- “One mustn’t criticize other people on grounds where he can’t stand perpendicular himself”. However, people may not get away with their instincts of pulling back an individual’s leg to justify their incompetence in that particular field. You may have to look forward to the opportunities rather than looking back at mean and unkind people. It is up to the individual to choose the route of learning to take in order to reach the goals he or she wishes to achieve. For example, people who don’t have sufficient knowledge about cryptocurrency may advise you to avoid trading. Nevertheless, once you gain a thorough understanding of the topic, you may be able to earn profits (with Bit Index AI or any other platform) on your investments.

Someone once told me that fear is just an acronym for “False, Evidence Appearing Real.” If we nurture our fears more than our faith, we become frozen. You can’t live in fear any more than you can live by what other people think. If you believe in your mission, if you have set your goals, you must learn how to navigate the boulders every bit as you do the pebbles in the stream. If you fall down, you must get back up. Over and over and over again, until you ultimately get to where you want to go. That is commitment. That is perseverance. That is how you get from here, to there. Don’t let anyone tell you that you “can’t.” Because where there’s a will, there’s a way. Remember, success is always the best revenge. Just keep your head down, and by all means, keep on moving.