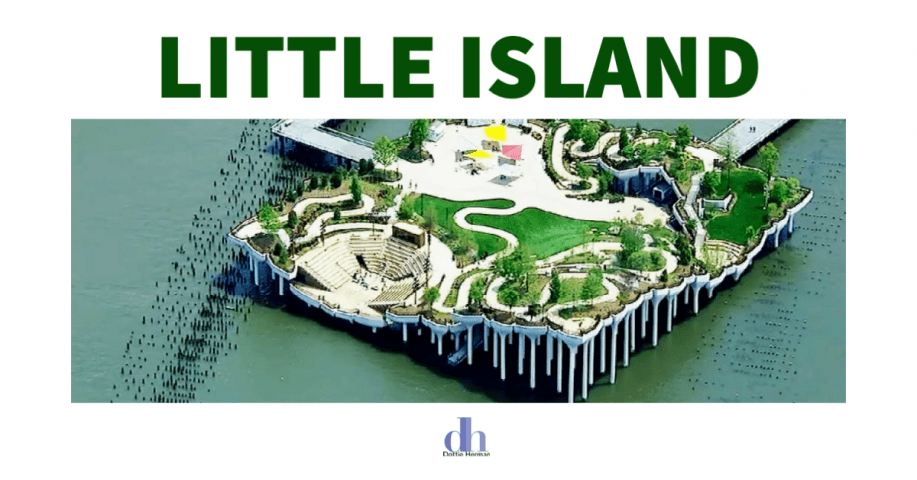 In a city full of constant transformation, nothing has struck me as more profound in recent times than the opening of Little Island/Pier 55. Not since the opening of the Highline have I been more excited about a new addition to the city.

Everything about this new public park shouts, “New York Is Back and Better than Ever!”

Through their Diller-Von Furstenberg Family Foundation, in partnership with the Hudson River Park Trust, Barry Diller and Diane Von Furstenberg, brought to life a vision they had years ago, one that can only be described as magnificent. The 2.7 acre island is built on pillars from the former Pier 54, which used to reside in the same location off the Westside Highway and 13th Street. It’s comprised of 132 concrete piles that are meant to resemble tulips.

A pedestrian walkway connects this floating island to Manhattan—behind the ruin of a Cunard archway–the exact spot where survivors from the Titanic were brought to shore in 1912.  There’s a 687 seat amphitheater, a second smaller stage for more intimate performances and a central plaza that will serve food and drinks.

With the advent of Little Island, the city landscape will never be the same. Literally. There’s more than 350 species of flowers, trees and shrubs on the island. More than 66,000 bulbs and 114 trees have been planted!

Instead of the industrial eyesores we’d gotten used to seeing on the west side, we can now admire this “eye candy with killer views” whenever we want. I haven’t visited yet, but I hear there are lots of surprises—hidden gems to explore when I do.

What I love so much about this glorious addition to our city is that it represents change. In this case, change for the better. New York has always been a city that adapts well to change. Sure, some of us fight progress, while others welcome it with open arms, but I think most of us can agree that what the Diller-Von Furstenberg Foundation has given to all of us, goes far and above generous. And the timing of its opening couldn’t have been more appropriate. Little Island is a gift of hope. It’s a promise of new beginnings. It’s a reminder to stop and smell the flowers from time to time. Life gets fast in New York, but that doesn’t mean we can’t find a balance between work, play and rest. In fact, I think it’s critically important—especially now.

It’s also a reminder of the value of commitment. Barry Diller had his first meeting about building Little Island ten years ago, starting building seven years ago and it was nearly shut down in 2017. And despite it costing more than double its original cost to build, he willingly saw it through to the end—and will continue to support the maintenance of the island for the next twenty years. That’s what New Yorkers do. We don’t give up when we are challenged. We find a way to fix the problem. We don’t quit when things get hard. No, instead, when the going gets tough, we get going.

We owe a debt of gratitude to Barry Diller and Diane Von Furstenberg. This west side miracle will fortify our great city for generations to come. I, for one, want to say thank you. Thank you for believing in New York and its people. Thank you for helping all of us rise up when we were feeling so beaten down. Thank you for your vision, your resources, perseverance and never giving up. You have shown all of us that it is possible to make a difference in other people’s lives. Big or small, the act of giving selflessly is to be aspired to.
It’s true that the happiest people I know are not those getting more—they’re giving more.

How are you giving back these days? What can you do to be of service to others?

Tell me your thoughts. I’d love to hear them.